AntPhos: An effective monophosphorus ligand for cross-coupling and asymmetric catalysis 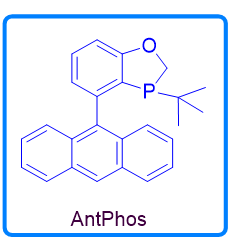 AntPhos, either racemic or chiral, has become a powerful monophosphorus ligand for cross-coupling and asymmetric catalysis. It has several unique structural and physical features; 1) The upper benzooxophosphole moiety makes AntPhos a ligand with an unambiguous conformation; 2) The potential existence of a π coordination between the lower anthryl ring and the transition metal makes AntPhos an excellent ligand for cross-coupling at low catalyst loadings; 3) The relative electron-richness in contrast to a monophosphoramide-type ligand makes it a powerful ligand to activate an inert bond; 4) The large pi system of the lower anthryl ring is an excellent functionality for a noncovalent interaction with the substrate, allowing chiral AntPhos to be an efficient ligand for many asymmetric catalytic transformations; 5) The ligand is air-stable and easy to handle for industrial applications.

The following are some transformations enabled by racemic AntPhos.

The Miyaura borylation enabled by the Pd-AntPhos catalyst has provided a broad substrate scope with good compatibility with steric hindrance and functional groups. The method is particularly useful for later-stagesynthesis of complex molecules.

In this coupling reaction, a high turnover number up to 40000 TONs has been achieved with the Pd-AntPhos catalyst, which has significantly reduced the amount of palladium catalyst and production cost compared with the traditional catalyst system.

The following are some enatioselective transformations enabled by chiral AntPhos:

High yields and enantioselectivities were achieved in asymmetric reductive cyclization of alkynones to provide a series of chiral tetrahydrofurans, pyrrolidines, and piperidines bearing chiral tertiary alcohols.

The Pd-AntPhos catalyst has enabled this powerful transformation with excellent yields, chemoselectivities, and enantioselectivities during the synthesis of a number of terpenes, steroids, alkaloids, and polyketals.

Chiral AntPhos has enabled the asymmetric Heck reaction for enantioselective construction of a chiral quaternary carbon center, applied in the synthesis of Mesembrine.

In summary, AntPhos has been widely applied in Suzuki-Miyaura cross-coupling reactions, showing its effectiveness in tolerating steric hindrance, functional group compatibility, and low catalyst loading. The chiral AntPhos is an effective ligand for various asymmetric catalytic reactions. Because of its effectiveness and versatility in homogeneous catalysis, both academic and industrial laboratories are encouraged to have it on their shelves for scientific research.

Products mentioned in this blog and related products: