Tin oxide offers many advantages for electronic and optical applications due to its high transparency, infrared reflectivity and ~3.62 eV band gap as a semiconductor property. These unique traits have been applied to energy conserving windows for buildings, gas sensors and transparent conductive electrodes for thin film solar cells.   Recently, Sn chalcogenides such as Cu2ZnSn, SnS and SnSe are being studied for solar cell applications due to their low toxicity, compared to Cd and Pb, and economical large scale production.

Atomic Layer Deposition (ALD) is a popular method used to make conformal Sn thin films on challenging nanodevice substrates.  The success of this process depends upon having a Sn precursor that is sufficiently stable, volatile and reactive. One such precursor that is now available anddemonstrated to be effective is Bis(N,N’-di-i-propylacetamidinato)tin(II) (Strem# 50-1170).1 This amidinate vaporizes at temperatures over 90OC and has demonstrated thermal stability up to 250OC.2  The SnS ALD growth rate using this precursor with H2S was a consistent 0.9 Å/cycle over the substrate temperature range of  100-250OC (ALD window).2 These films were polycrystalline and granular with uniform thickness inside holes with aspect ratios > 40:1.1 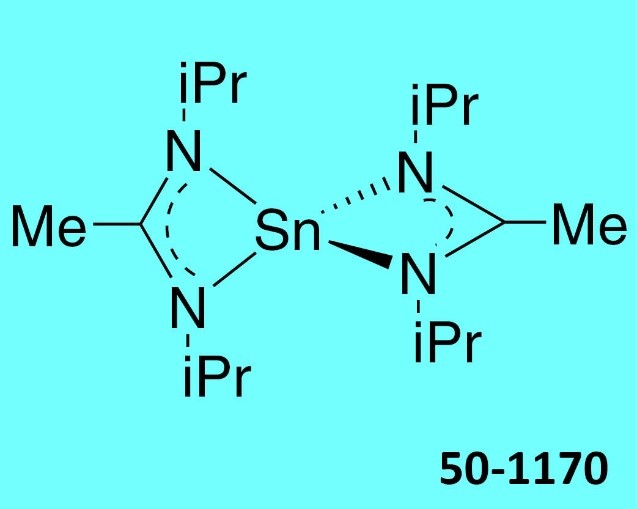 For more information on other metal amidinates and CVD/ALD precursors offered by Strem, please see the links below: